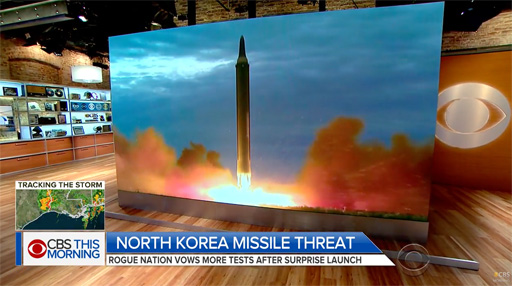 I’ve wondered what or how the U.S. would technically respond if North Korea were to actually launch a ballistic missile attack on us.

I assumed there would be an intercept of some kind, but wasn’t sure what it would be. Fighter jets? Missiles?

The Diplomat has the details:

Days after North Korea launched an intermediate-range ballistic missile that flew over Japan’s northern island of Hokkaido and landed in the northern Pacific Ocean, the U.S. Navy successfully conducted a complex missile defense test this week at the Pacific Missile Range Facility off Kauai, Hawaii, according to a Raytheon company statement.

The Standard Missile-6, one of the U.S. Navy’s most advanced missile interceptors, intercepted a medium-range ballistic missile target at sea in its final seconds of flight, after being fired from the Arleigh Burke-class guided missile destroyer USS John Paul Jones. The principal objective of the launch was test to a new targeting software designed to enable the SM-6 to intercept a ballistic missile warhead descending from the upper atmosphere at extreme speed.

The endo-atmospheric interceptor uses a blast-fragmentation warhead to engage its target.