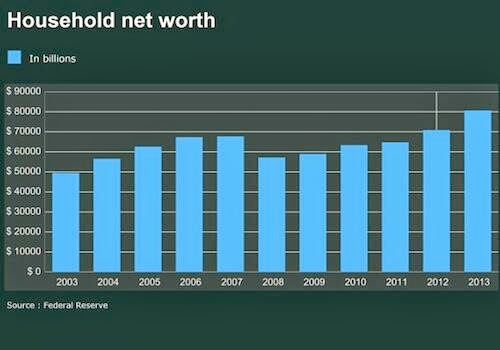 Another “fail” by the Socialist/Communist President Obama.  Check the graph above starting in 2009 when Obama took office.

From the conservative Wall Street Journal:

The net worth of U.S. households and nonprofit organizations—the value of homes, stocks and other assets minus debts and other liabilities—rose 3.8% in the fourth quarter of 2013, up about $3 trillion from the prior quarter, to $80.7 trillion, according to a report by the Federal Reserve released Thursday.

After a while, you have to wonder what conservative/Tea Party folks will have left to complain about.  Two wars ended, Osama bin Laden dead, stock market doubled, real estate values improving, more equal rights for all…