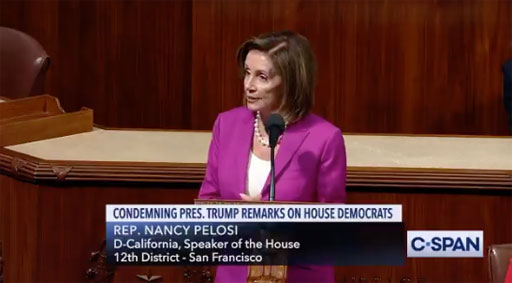 The House voted on Tuesday to condemn as racist President Trump’s attacks against four congresswomen of color, but only after the debate over the president’s language devolved into a bitterly partisan brawl that showcased deep rifts over race, ethnicity and political ideology in the age of Trump.

The measure passed nearly along party lines, 240-187, following one of the most polarizing exchanges on the House floor in recent memory. Only four Republicans and the House’s lone independent, Representative Justin Amash of Michigan, voted with all Democrats to condemn Mr. Trump.

“I know racism when I see it, I know racism when I feel it, and at the highest level of government, there’s no room for racism,” thundered Representative John Lewis, Democrat of Georgia, an icon of the civil rights movement who was nearly beaten to death in Alabama in 1965.

House Republicans, of course, defended the current occupant of the Oval Office.

WATCH: Complete remarks from @SpeakerPelosi — “These comments from the White House are disgraceful and disgusting and these comments are racist.” pic.twitter.com/EB99FmC18U

Republicans flipped out as Rep. Eric Swalwell ran through a list of racist Trump statements and positions on the House floor. pic.twitter.com/OFk1ySStpe