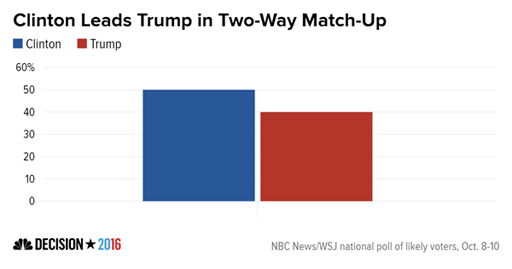 The folks conducting polls for NBC News/Wall Street Journal went back to 400 of those respondents they surveyed after the 2nd presidential debate Sunday night and asked if the debate changed any of their support for either Hillary Clinton or Donald Trump.

The follow-up showed revises the original results to indicate that Clinton has a 9 point lead over Trump in a four way contest. Clinton garners the support of 46 percent of likely voters, while Trump has 37 percent, Libertarian Party candidate Gary Johnson has eight percent and Green Party candidate Jill Stein has two percent.

Among the 400 “after debate” respondents, the race tightened to a 7 point lead for Clinton. That “gain” is relative to the sex tape fallout.

It should be noted that 400 in a national poll is a small sampling. And, it goes without saying, a 7 point lead less than 30 days out from the election is significant.

The new data incorporate interviews that were conducted after Sunday night’s debate. Poll data released by NBC News and the Wall Street Journal on Monday, which only included interviews conducted before the debate, showed Clinton with a 11 point lead in a four-way contest and a 14-point lead in a head-to-head matchup.

Among only those respondents contacted after the debate, Clinton’s lead shrank to a seven point advantage in both a four-way matchup and in a head-to-head race — reflecting the same margin that Clinton showed in a mid-September NBC/WSJ poll.