Gleeks MUST tune in for next week’s episode of Glee, called “The First Time.” 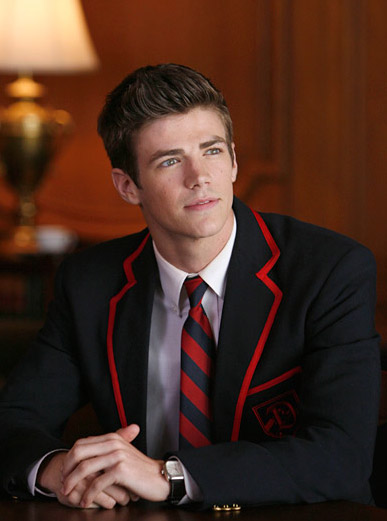 No sooner does Grant Gustin’s gay Warbler debut than he sets his sights on Blaine.  He’s got charisma to spare and tons of chemistry with Darren Criss.

When Sebastian invites Kurt and Blaine out to local gay haunt Scandal, Kurt runs into his old nemesis at the bar. Apparently, transferring to a new school has done wonders for the bully’s disposition. He’s mellowed out considerably and coming to grips with his sexuality. It’s my favorite scene of the episode and should fire up those Kurt-Karofsky ‘shippers out there (and I know you’re out there).

“It’s all handled very delicately and is incredibly moving. I can’t think of another network series that’s taken a teenage gay relationship so far or been so progressive. The moment is instigated when another teen, Warbler member Sebastian (Grant Gustin), aggressively pursues Blaine. The trio actually have a very amusing triple date to West Lima’s only gay bar Scandals and run into none other than Karofsky (Max Adler). Look for a great moment between Karofsky and Kurt.”