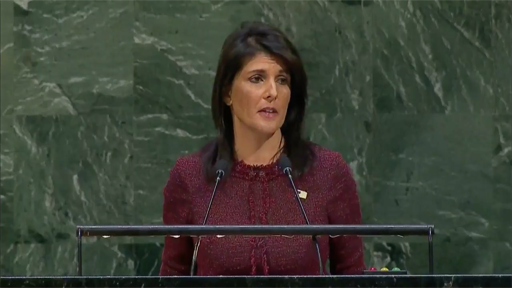 The overwhelming majority of the world’s nations delivered a stinging rebuke to the United States on Thursday, denouncing its decision to recognize Jerusalem as Israel’s capital and ignoring President Trump’s bombastic threats of revenge.

In what amounted to a collective act of defiance toward Washington, ambassadors of the 193-member General Assembly voted 128 to 9, with 35 abstentions, to approve a nonbinding resolution demanding that the United States rescind the Dec. 6 decision on Jerusalem, the contested holy city, which also included a plan to relocate the American Embassy there.

Earlier today, United States Ambassador to the UN Nikki Haley issued a direct threat saying the US will consider pulling funding to the world body should the resolution pass.

And in an email to the General Assembly members, Haley wrote, “The President will be watching this vote carefully and has requested I report back on those countries who voted against us. We will take note of each and every vote on this issue.”

.@NikkiHaley tells @UN General Assembly: “America will put our embassy in Jerusalem. That is what the American people want us to do and it is the right thing to do. No vote in the United Nations will make any difference on that.” #UNGA pic.twitter.com/qqVZOJvgpd

BREAKING: A majority of the UN General Assembly just voted to oppose the U.S. decision to recognize Jerusalem as Israel’s capital.

America vetoed a similar resolution at the UN Security Council on Tuesday. pic.twitter.com/pWUE6cJoug

On Wednesday, President Trump warned countries that vote against the US at the UN that "we're watching those votes. Let them vote against us. We'll save a lot. We don't care." pic.twitter.com/gP6KVF4kE1— NBC News (@NBCNews) December 21, 2017