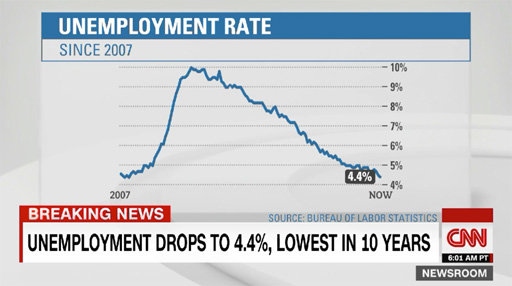 Please note the curve downward throughout almost all of President Obama’s 8 years in office.

Throughout the campaign, Donald Trump called this metric of measuring unemployment “fake.”

Now that he’s president he calls them “real,” taking credit for the good news.

The unemployment rate dropped to 4.4%, its lowest level since May 2007.

The low unemployment rate captures how far the US economy has come since the Great Recession ended in 2009, when unemployment hit 10%.

Many economists say the US is now at or near “full employment,” meaning the unemployment rate won’t go down significantly more. It’s a state, where employers have to pay up to hire, because it becomes hard to find workers. That’s why wage growth is expected to pick up.

Unemployment lowest in 10 years at 4.4% — @ChristineRomans has the report https://t.co/zYg7nqpOzB https://t.co/9LK1u1kzOb