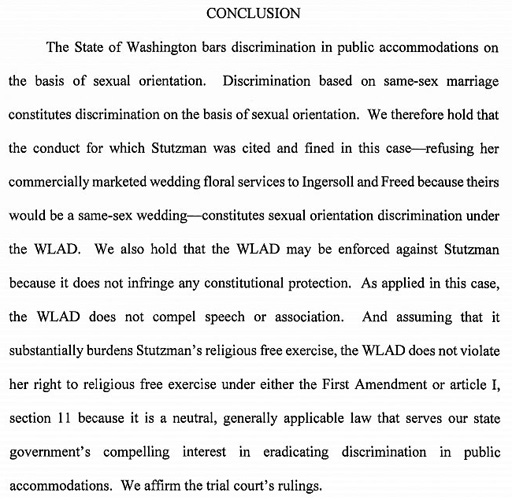 ABC News reports that Barronelle Stutzman, the Washington state florist who refused to sell wedding flowers to a same-sex couple in 2013, has lost again in court.

This time it was a unanimous ruling from the nine Washington state Supreme Court justices who ruled Stutzman discriminated against the gay couple in 2013 according to the state’s public accommodation laws.

Stutzman’s supporters maintain the ruling could “bankrupt” her. The penalty for the public accommodation violation is $1,000. Virulently anti-gay Alliance Defending Freedom is handling her court case for free.

Stutzman’s defense was that she had previously sold flowers to the couple, but had to refrain on wedding flowers due to her personal religious beliefs. She feels selling flowers for a wedding she is not attending amounts to “promoting” or “supporting” same-sex marriage.

Stutzman’s lawyers say they will now take the case to the U.S. Supreme Court.