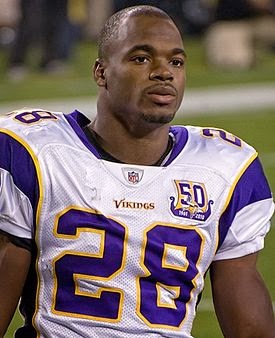 From NBC Sports: The 2-year-old son of Vikings running back Adrian Peterson has died.

Police in South Dakota confirmed to Chip Scoggins of the Minneapolis Star Tribune
that the 2-year-old boy died, days after he was allegedly beaten by his
mother’s boyfriend. Robert Joseph Patterson was arrested on charges of
aggravated battery of an infant and aggravated assault, and the state’s
attorney is now reviewing the matter for possible additional charges.

The names of the boy and his mother are being withheld, at the
family’s request. Peterson briefly addressed reporters today and asked
for privacy for his family.