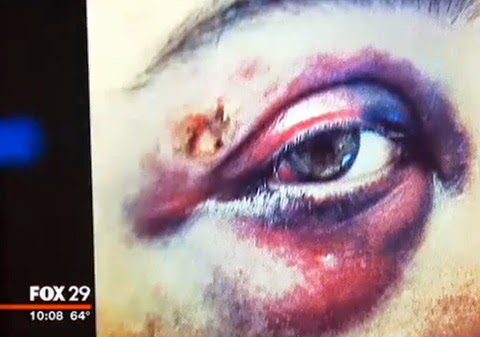 Two Philadelphia men were attacked and violently beaten in what is being labeled a hate crime.

Investigators say a gay couple was walking in Center City when they were stopped by a group of people and brutally beaten on the corner of 16th and Chancellor. Both of the victims are now recovering from serious injuries, including one man having his jaw wired shut due to severe fractures.

From the local NBC affiliate:

Sources tell NBC10 the 27-year-old and 28-year-old victims were walking from a restaurant in the area of 16th and Chancellor around 10:45 p.m. Thursday.

Suddenly they were approached by a visibly intoxicated group of two men and six women.

Witnesses say someone in the group asked, “Is this your fucking boyfriend?” When one of the victims told them yes, the group allegedly attacked them, punching and kicking them in the face, head and chest.

Police say one of the suspects then snatched a victim’s bag containing a cellphone, wallet and credit cards. The group then fled in an unknown direction.

“It was a bunch of screams at first,” said witness Geoff Nagle. “…a lot of punching and kicking.” Another witness, who asked to remain anonymous, says he heard the group screaming homophobic slurs.

Anyone who was in the area at the time is urged to contact police if you think you have any information that might be useful.