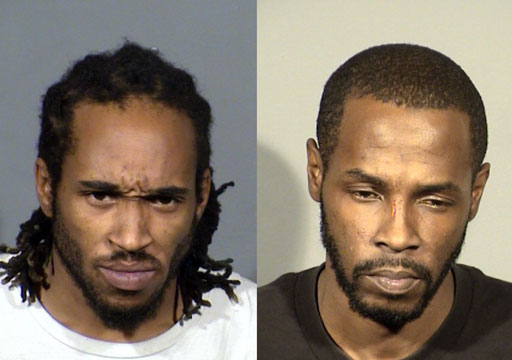 According to local Fox News affiliate, Andre Duncan, 39, and Kealan Abraham, 34, were arrested and charged with battery with a deadly weapon, battery with use of deadly weapon result of substantial bodily harm and conspiracy to commit criminal contempt.

The incident occurred near Vegas Drive and Simmons Street outside the gay couple’s home.

Charles Clements told police he and his boyfriend were followed home and attacked on November 29 as they arrived at their home.

The assault spilled onto their front patio where a glass table was knocked over and shattered. According to Clements, one of the men picked up a shard of glass and began to stab his boyfriend Vincent in the back puncturing his lung and breaking two ribs.

Clements said the men called Vincent a “faggot” and “an abomination” during the attack. Clements suffered head wounds.

Clements said neighbors heard the attack and then saw everything.

“Neighbors, everybody just looking,” he said. “Nobody called the police.”

Police said officers found Duncan’s driver’s license on the scene of the attack.

Vincent told police he recognized one of the attackers as a man who works with him at Walmart. That’s how the man knew about their relationship, he said.

“It was all about gay bashing,” Clements said. “The guy came up to my boyfriend’s job, calling him an abomination, calling him ‘fag.’”

When police went to Abraham’s home on December 2, Duncan’s car was present. According to police reports, he was seen leaving the home and drove to Walmart. Officers arrested him there.

Police arrested Abraham at his home.

Both men admitted to taking part in the fight but claimed there was not ‘hate crime’ aspect to the attack.