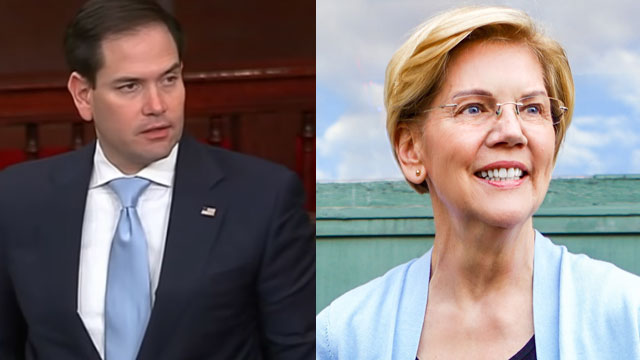 Earlier this week, during the CNN LGBTQ Town Hall, Sen. Elizabeth Warren delivered the viral moment of the evening when she was asked what she would say to someone on the campaign trail who might tell her, as someone who is old-fashioned, their faith teaches them that “marriage is between one man and one woman.”

Replied Warren, “Well, I’m going to assume it’s a guy who said that, and I’m gonna say, then just marry one woman. I’m cool with that.”

As the crowd roared in approval, the senator added, “Assuming you can find one.”

GOP Sen. Marco Rubio, who never misses a chance to embarrass himself, took to Twitter to troll Warren writing, “Vividly captures the condescension of elites & their incessant ridicule of Americans with traditional values. It elicits glee among celebrities & blue check brigade. But for the millions sick of being disrespected, it elicits support for fighting back, even in a crude or vulgar way.”

Vividly captures the condescension of elites & their incessant ridicule of Americans with traditional values. It elicits glee among celebrities & blue check brigade. But for the millions sick of being disrespected it elicits support for fighting back,even in a crude or vulgar way https://t.co/uJgfyxMpUQ

“Condescension?” “Ridicule?” Little Marco, try being LGBTQ in America someday if you want to talk ‘ridicule.’

Twitter was not about to let Little Marco, who went from chiding Donald Trump for his micro-dick to being a staunch supporter of the serial sexual assaulter famous for declaring he likes to grab women “by the pussy.”

Just what “traditional values” are those, Marco? Those of the serial sex-abuser, rapist, racist, lying, traitorous, corrupt, criminal president? Or those that enable him, hypocritically spewing scripture while violating every commandment of every religion known to man?

Since I don’t have a blue check, Marco wants me to respond:

It’s hilarious hypocrisy that someone who mocked a presidential candidate on live TV for his micro-penis is now scolding other people about how unseemly it is to ridicule others.

Also, you’ve got a lot of nerve clutching your pearls at Warren’s joke here when your entire party spends its time crapping on anyone who lives in a city or has a bachelor’s degree as overprivileged snobs who can’t even feed themselves.

Dude, way to tell on yourself by describing hatred of gays as a “traditional value.”

Marco, you are truly a fool. Crude and vulgar? That would be Trump. And guess what? There are millions of us who found solace in Ms. Warren’s pro-equal marriage defense.

Marco and the Religious Right hold the sanctity of marriage SO high that they can’t support gay marriage, but are totally cool with supporting a liar who’s NEVER upheld his marriage vows to any of his THREE wives and has broken most of the 10 Commandments. pic.twitter.com/FKgcfH5uPT

“Millions sick of being disrespected”?

You mean millions in the LGBTQ community who can legally be discriminated against? Who for years were ridiculed, ostracized, beaten & arrested – even murdered – for simply living & loving the way God made them?