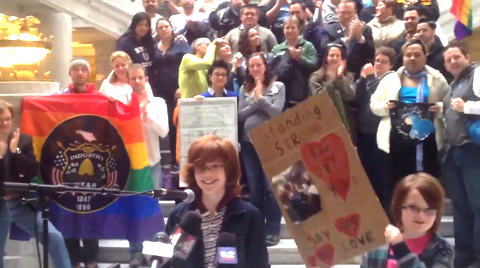 Mary Barnes said, “these are good people. These are Americans. They are here, they have family’s they have kids.”

2,000 people crowded into the State Capital for the “Let it Stand” rally, organized by Restore Our Humanity.

The petition, calling on Governor Gary Herbert to recognize the 1,360 same-sex marriages that took place in the 17 days when such unions were legal, was delivered to the Governor’s office.

While the rally was full of impassioned pleas for equality, one 12-year-old’s speech made arguably the strongest, most heartfelt case for equality in the Beehive state.

With his little brother at his side, Riley Hackford-Peer delivered a poignant, emotional speech that garnered several enthusiastic rounds of applause.

“Some people do not believe that I am from a loving family, because my moms are gay,” said Hackford-Peer. “They are wrong. … And come on, think about it — gay means happy, so it only makes sense that we’re a loving, happy family!”

Watch Riley’s epic speech at the Utah state capitol below. More at the Advocate