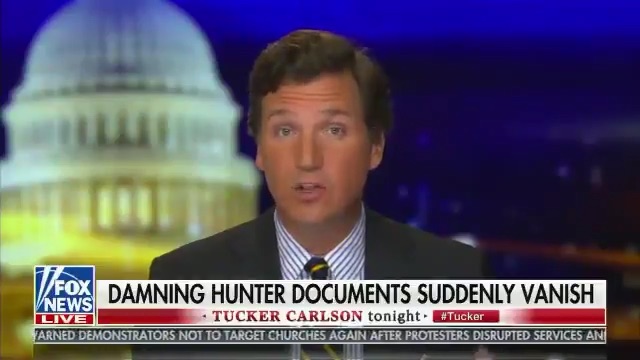 During his Wednesday night show, Fox News pundit Tucker Carlson told his audience that his producers had acquired “incriminating documents” about Hunter Biden, the son of former Vice President Joe Biden, but the documents had “vanished” while being shipped from New York to Los Angeles.

In a bizarre segment on Wednesday night’s show, Carlson alleged that his team mailed the documents from New York to Los Angeles after receiving them from a “source” on Monday, but that the bundle never arrived.

Without providing any further details or evidence, Carlson said the “damning” documents had “vanished” on route, heavily implying foul play.

Carlson said a producer had shipped the documents to him from New York to Los Angeles via a “brand-name company”. When they didn’t arrive, the shipping company told Fox that their package had been opened and the documents had “disappeared”.

Viewers questioned why Fox shipped the only copy of such “damning” material without making any kind of back-up, and the segment has since been a subject of ridicule on social media.

Within the last hour, a spokesman for UPS told The Daily Beast that they had located the mysterious package Carlson suggested had been deliberately misplaced or intercepted because it contained “damning” materials on the Biden family.

“After an extensive search, we have found the contents of the package and are arranging for its return,” the spokesman said.

If I understand the implications of his argument, I believe Tucker is arguing the Deep State ate his homework. Or something like that. https://t.co/BxqnFT4hyx

this is actually important, beyond being comical: the reason the Hunter laptop story has gone nowhere is bc Rudy etc ***won't produce** the laptop for reporters to confirm etc.