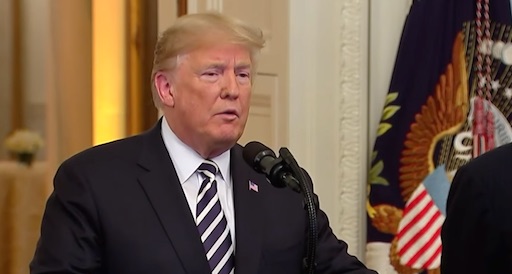 Donald Trump continues to make up his own facts as he campaigns in the weeks before the midterm elections.

Before heading to Texas yesterday, the Trumpster took questions in front of Marine One.

At one point, he told reporters he plans on a new “middle class tax cut” that he says will be “putting in” in the next week or so.

Tax legislation has to be passed by Congress, and Congress is not in session again until after the midterms.

Here’s the exchange per WhiteHouse.gov:

Q You said “lower tax cuts.” You said that you wanted tax cuts by November 1st. Congress isn’t even in session. How is that possible?

THE PRESIDENT: No, we’re going to be passing — no, no. We’re putting in a resolution sometime in the next week, or week and a half, two weeks.

Q A resolution where?

THE PRESIDENT: We’re going to put in — we’re giving a middle-income tax reduction of about 10 percent. We’re doing it now for middle-income people. This is not for business; this is for middle. That’s on top of the tax decrease that we’ve already given them.

Q Are you signing an executive order for that?

THE PRESIDENT: No. No. No. I’m going through Congress.

Q But Congress isn’t in session though.

THE PRESIDENT: We won’t have time to do the vote. We’ll do the vote later.

Q Congress is out.

THE PRESIDENT: We’ll do the vote after the election.

Trust and believe, there will be no “middle class tax cut” in the next week or two.

Additionally, Trump has been extremely resistant to believe that the Saudi Arabian government was involved in the murder of journalist Jamal Khashoggi, even though a mountain of evidence is turning up daily.

Trump’s primary reticence is due in part to an arms deal his administration did with the Saudis that he doesn’t want to endanger because he says it would cost the U.S. jobs.

Then, just days later, he told Fox Business that the deal would create 500,000 jobs.

On Friday that number had grown to 600,000 jobs, and by Saturday the Donald said 1 million American jobs rely on all Saudi investments, which total $450 billion.

According to numbers for 2016, only 355,500 people worked in the U.S. defense and national security sector according to the U.S. Aerospace and Industries Association.

Suddenly one arms deal is going to triple that figure?

One more lie to note from the Trumpster:

The president has told folks at his campaign rallies that there are “middle Eastern terrorists” in the midst of the migrant caravan making it’s way towards the United States.

News networks have taken camera crews down to the caravan and looked for middle Eastern terrorists. Nope, none to be found. Watch the report below from CNN.

“Ginning up fear of the stranger is a tactic that’s as old as politics,” reports @BillWeirCNN from the migrant caravan heading towards the US. “But these folks, they’re oblivious and if they do know about the President’s tweets, it’s going to take more than that to stop them.” pic.twitter.com/bHMFE49dY5

Asked about fact there is no proof behind his claim there are “unknown Middle Easterners” in the caravan, POTUS says “there’s no proof of anything but there could very well be.”— Jake Tapper (@jaketapper) October 23, 2018