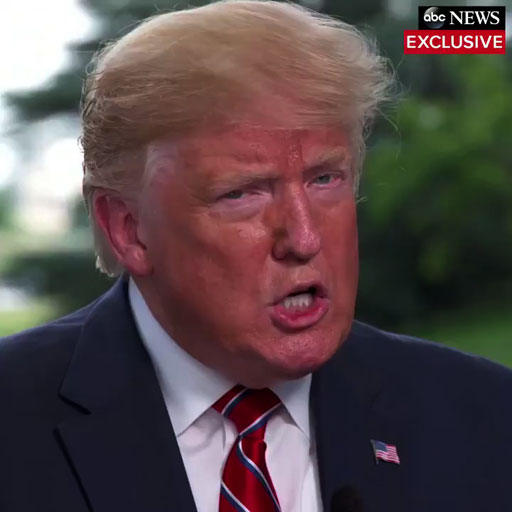 In a newly-released segment from ABC News, Donald Trump says he was never going to fire Special Counsel Robert Mueller during the two-year investigation.

President Donald Trump is challenging his former White House counsel’s testimony to Robert Mueller, asserting that he never even so much as suggested firing the special counsel. In an interview with ABC News, the president suggested that Don McGahn told Mueller of Trump’s supposed directive that he be fired in order to save face.

“The story on that very simply, No. 1, I was never going to fire Mueller. I never suggested firing Mueller,” Trump said. Pressed on why McGahn would have told Mueller’s team during his more than 30 hours of voluntary interviews of the multiple times the president sought to have the special counsel removed, Trump pushed back.

“I don’t care what he says, it doesn’t matter,” he argued. “That was to show everyone what a good counsel he was.”

Note how Trump cuts George off – “…Excuse me…”

Trump claims his former White House counsel Don McGhan lied under oath – will McGhan allow his reputation to be destroyed by this or will he stand up? https://t.co/HFPBhbMsRU

Trump continues to bash McGahn – even suggesting he lied under oath to Mueller – even as McGahn is defying a congressional subpoena to testify and provide records at the direction of the White House https://t.co/oWf2vmIMSs

This exchange demonstrates why Trump’s lawyers didn’t let him testify under oath. Trump contradicts former White House Counsel Don McGahn, who is corroborated by other evidence, and claims McGahn made it up because he wanted to look like a good lawyer. pic.twitter.com/s9OQ8MaRjc— Renato Mariotti (@renato_mariotti) June 14, 2019