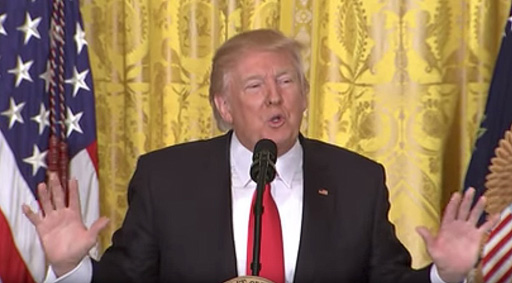 You could get whiplash following the story of whether or not Donald Trump has agreed to work with Democrats in Congress on solving the issue of DACA.

Last night Senate Minority Leader Chuck Schumer and House Minority Leader Nancy Pelosi announced, after a dinner meeting at the White House, that Trump had agreed to support legislation that would allow undocumented immigrants brought to the U.S. as children to remain in the states.

Then, Trump tweeted there was no deal.

Now, he says there is.

President Trump confirmed on Thursday morning that he supports legislation that would protect young undocumented immigrants from deportation and would deliver a “massive” increase in border security — but not with a wall on the southern border.

Mr. Trump’s comments, both in Washington and in Florida, affirmed the broad parameters of an agreement that Democratic leaders unilaterally announced Wednesday night after dinner with the president at the White House.

In remarks to reporters as he left the White House on Thursday, Mr. Trump said, “We’re working on a plan for DACA,” referring to protections for immigrants who are part of the Deferred Action for Childhood Arrivals program. He confirmed, “the wall will come later.”

Mr. Trump’s comments seemed to contradict his own Twitter posts early Thursday morning when he said, “no deal was made last night on DACA.” But they were very much in line with Democratic leaders’ statements. Representative Nancy Pelosi of California, the House Democratic leader, also stopped short of calling their agreement a “deal” on Thursday.

But she told reporters, “We agreed to a plan to protect our nation’s Dreamers from deportation,” adding that there would be a “border security measure that does not include a wall” included in immigration legislation.

Trump on DACA: We’re not looking at citizenship or amnesty, “we’re looking at allowing people to stay here” https://t.co/5WP4pKOjGg

Anti-immigration Republicans like Rep. Steve King are furious over the developments:

@RealDonaldTrump If AP is correct, Trump base is blown up, destroyed, irreparable, and disillusioned beyond repair. No promise is credible. https://t.co/uJjxk6uX5g

President Trump brought parents of children murdered by illegal alien “dreamers” on stage with him. #DACADeal will be a huge betrayal.

Politicians are supposed to keep their word. R’s failed on Healthcare, broke their word They have failed! @POTUS needs to keep his promises https://t.co/NldKWcFrRB

At this point, who DOESN’T want Trump impeached? https://t.co/g1mMhmm8ng