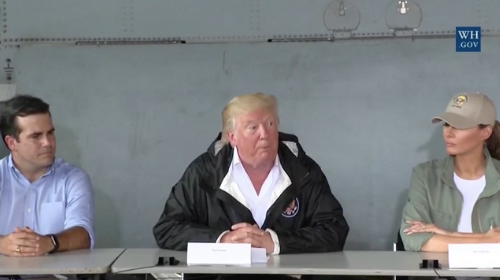 Sitting with local Puerto Rican officials and federal cabinet members, Donald Trump said, “Now I hate to tell you, Puerto Rico, but you’ve thrown our budget a little out of whack.”

He went on to contrast the devastation on the U.S. territory to that of New Orleans after Hurricane Katrina which he characterized as a “real catastrophe.”

“Every death is a horror. But if you look at a real catastrophe like Katrina, and you look at the tremendous – hundreds and hundreds of people that died – and you look at what happened here with a storm that really was totally overpowering. Nobody’s ever seen anything like this. And what is your death count – 16 people certified. Sixteen people versus in the thousands. You can be really proud of all of your people, all of our people, working together. Sixteen versus literally thousands of people.”

I’m not sure how he thought that sentiment would help the citizens of Puerto Rico.

Nor why he chose to think of “your people” versus “our people.” Everyone there is an American.

President Trump: “Now I hate to tell you, Puerto Rico, but you’ve thrown our budget a little out of whack” https://t.co/3DSMX2ysAx