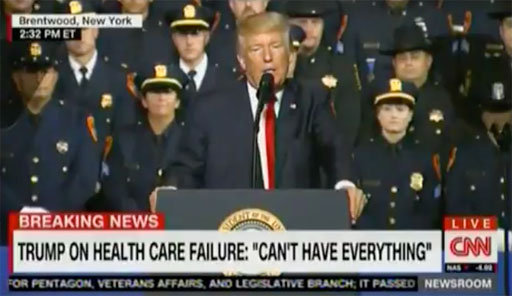 Speaking to an audience of police officers in Long Island, New York, Donald Trump encouraged the officers not be “too nice” to folks they arrest.

“When you see these thugs being thrown into the back of a paddy wagon, you just see them thrown in. Rough. I said, ‘Please don’t be too nice.’

“Like when you guys put somebody in the car, and you’re protecting their head, you know, you put your hand up like, ‘Don’t hit their head?’ And, they’ve just killed somebody? I said, ‘You can take the hand away.’”

Here’s the president of the United States encouraging police officers to be rough with people they arrest pic.twitter.com/iLzoUEY89e

Note the one guy in a cowboy hat on the right not applaud.

Remember when folks were considered innocent until proven guilty?

Trump says that he’s okay with police being rougher on arrested suspects, such as hitting their head on police car. Crowd of police cheers.

The President really does have a genuine, unmistakable talent for bringing out the worst in people.

Trump is LITERALLY encouraging police brutality right now during his speech to a group of law enforcement officers.