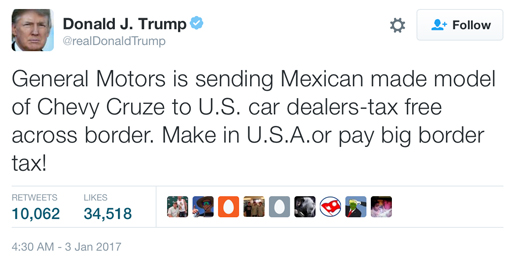 Just as he promised throughout the campaign, Donald Trump is beginning to threaten American companies that move jobs abroad by slapping them with a “big border tax” along the lines of 35% on imported goods.

General Motors is the latest target of President-elect Donald Trump’s Twitter cannon, with the Manhattan billionaire complaining that the American automaker is manufacturing cars in Mexico and importing them into the U.S. without penalty. “General Motors is sending Mexican made model of Chevy Cruze to U.S. car dealers-tax free across border. Make in U.S.A. or pay big border tax!” Trump wrote on Twitter Tuesday morning.

General Motors issued a statement in response regarding it’s manufacturing of the Chevy Cruze:

General Motors disputed the facts in Donald Trump’s Tuesday morning attack on the automaker, saying it makes most of its Chevy Cruze models in the United States. The company said in a statement that “all Chevrolet Cruze sedans sold in the U.S.” are made at an assembly plant in Lordstown, Ohio. It clarified that it builds hatchback models for global markets in Mexico, “with a small number sold in the U.S.”

Free trade agreements, including NAFTA, were constant targets of Trump on the campaign trail.