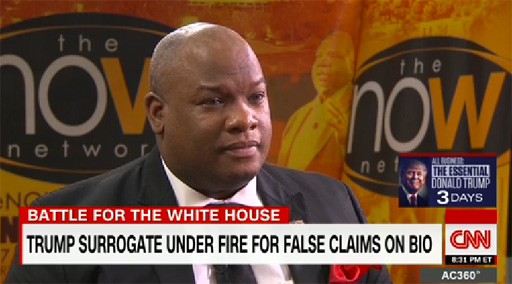 You’ll recall Pastor Mark Burns, who last week posted a controversial cartoon of Hillary Clinton in blackface. When asked about it, he backpedaled apologizing for the method but not the message.

Today, Burns in more hot water as it’s become apparent that he lied about some of his personal/professional accomplishments.

In an interview with CNN’s Victor Blackwell, he became combative and eventually walked off the set when asked about these embellishments.

South Carolina preacher Mark Burns, who regularly introduces Trump at his campaign events, had listed on his church’s website that he had a Bachelor of Science degree and served six years in the Army Reserve.

Burns, however, was never in the Army Reserve. He was in the South Carolina National Guard, from which he was discharged in 2008, CNN found. As far as a Bachelor’s degree, North Greenville University told CNN he only attended the school for one semester. Burns admitted that he did not finish his degree when CNN asked him about it.

When CNN confronted Burns about the various professional and social exaggerations he had featured on his biography, Burns first said the page had “obviously” been either “manipulated or either hacked or added.”

Burns eventually took responsibility for the lies, but blamed his being “targeted” because he’s a black man who supports Donald Trump:

“As a young man starting my church in Greenville, South Carolina, I overstated several details of my biography because I was worried wouldn’t be taken seriously as a new pastor,” Burns said in a statement Friday, pre-butting the report. “This was wrong, I wasn’t truthful then and I have to take full responsibility for my actions. Since that time I should have taken steps to correct any misrepresentations of my background. We all make mistakes, and I hope that the measure of my character and the quality of my works speak for what kind of person I am.”

“I do also want to set the record straight about why this attack is happening — because I am a black man supporting Donald Trump for President,” he continued. “For too long, African-American votes have been taken for granted by Democratic politicians, and enough is enough Instead, I’m going to tell people that there is another option — an option that represents a position vision that will unify our country. That’s why I have and will continue to tirelessly support Mr. Trump.”

So, some may ask, why it this important? This is a pastor of a small church who’s a volunteer for the Trump campaign.

The issue here is that Donald Trump has campaigned on the idea that he will surround himself with “the best people.”

For months, Burns has acted as a campaign surrogate; he has introduced Trump at many campaign rallies; he spoke at Trump’s convention. He has represented the campaign.

Burns admitted to CNN that there was “no vetting” of him to participate in the campaign. No surveys, no background checks.

So, if Donald Trump is touting his ability to judge and select the people he will let represent him, what does his decision to let a man who misrepresented a lot of his accomplishments say about him if he were to become president?