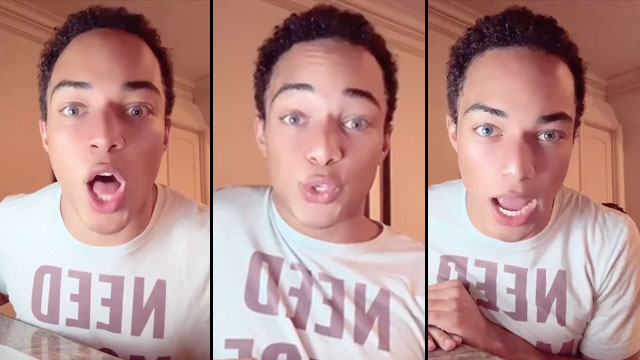 Comedian Kathy Griffin clapped back at little Christian Walker, son of former NFL player Herschel Walker, for his rather deranged rant on Twitter telling people to chill because “this isn’t over yet” and the Donald will somehow continue to be president after Congress meets on January 6.

Walker, who’s biggest claim to fame is apparently having been a ‘Spirit of Texas Royalty’ cheerleader (???), seems to find some consolation that a handful of states that Joe Biden flipped to blue have some crazed loons who ‘elected’ their own slate of Trump-supporting electors.

Said loons hope that Congress might count their electoral votes instead of the official electors, or at least muddy the waters for Congress.

This is Christian Walker. His dad is Herschel Walker, an NFL player who won the Heisman and has been friends with Donald Trump for almost 40 years. Christian Walker was raised in a pro-Trump bubble that blinded him so he rejects reality as a coping mechanism. pic.twitter.com/Eu7LEwnoiZ

IF there are two sets of electors, both houses of Congress decide separately which is the legal ‘will of the people’ slate of electors.

If the (GOP-controlled) Senate and the (Democratic-controlled) House cannot agree, “the votes of the electors whose appointment has been certified by the executive of the State, under the seal thereof, shall be counted.”

Those would be the electors who have been signed off by the governor of each state. Those electors total 306 for Joe Biden. Done.

After the young gay’s misguided remarks, Griffin intoned fellow gay icons Bette Midler, Lady Gaga, and Beyoncé wondering, “Ladies, how could we let this happen? HOW?”

Me calling Gaga, Bette and Beyoncé…
“Ladies, how could we let this happen? HOW?” https://t.co/dFTtQLnY9P

Better get Patti Lupone on the phone, too. You may even need to call a medium to channel Dorothy herself.

The nasty cheap polyester chiffon too, not the nice silk chiffon

whose gay is this???

Jan 20th gonna be an eye opening day for a LOT of delusionsal people!!!

and that’s not jumping the gun, that’s just how this thing works!

never have I ever seen such delusion… and FROM A GAY…

I am sorry dear, we breeders have closed the returns counter on this one. Maybe Walmart might take him on trade. XO