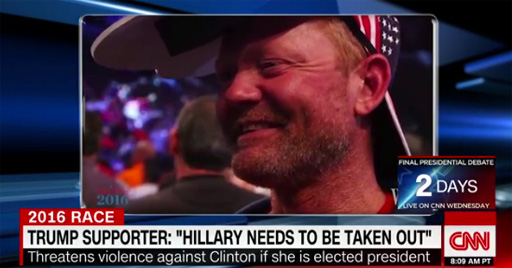 More threats of violence as a Trump supporter who describes himself as a “patriot” says if Hillary Clinton is elected president, he would do everything in his power to take her out.

The supporter, identified as 50-year-old Dan Bowman, told the Wall Street Journal last Thursday, “I feel like Hillary needs to be taken out. If she gets into government, I’ll do everything in my power to take her out of power. Which if I have to be a patriot, I will.”

When asked what he meant, Bowman responded, “Take it any way you want to take it.” After the Journal told him it sounded like a threat, Bowman said, “I’m a patriot.”

Bowman, who was wearing a Trump mask, also told the Boston Globe that Clinton should be “in prison or shot” and that there would be “a lot of bloodshed” if she won the election.

“If she’s in office, I hope we can start a coup,” Bowman told the Globe. “She should be in prison or shot. That’s how I feel about it. We’re going to have a revolution and take them out of office if that’s what it takes. There’s going to be a lot of bloodshed. But that’s what it’s going to take… I would do whatever I can for my country.”

A spokesperson for the Secret Service told BuzzFeed News they would respond with a statement.

Trump supporter at rally says “Hillary needs to be taken out” Watch: https://t.co/vwicB9i7vo