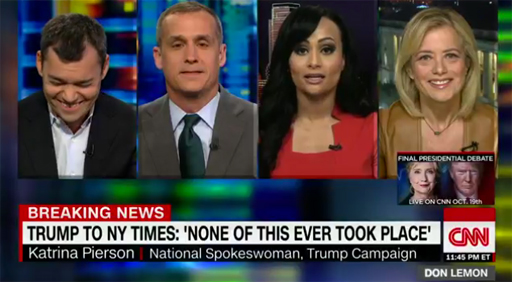 As Trump spokesperson Katrina Pierson tries to assert that one of the now many accusations of sexual assault by Donald Trump couldn’t have happened on a plane ride in first class back in the 80s, the rest of the panel begins to lose their shit laughing.

The Atlantic‘s Peter Beinart broke into uncontrollable laughter upon hearing Donald Trump spokeswoman Katrina Pierson go into a convoluted explanation on CNN about how he couldn’t have sexually assaulted a woman on a plane in the 1980’s.

Beinart was keeping it all together until Pierson unexpectedly starting rattling off airplane facts. “We’re talking about the early 1980s, Don. Seriously, back then, you had planes, what, a DC 9, DC 10, an MD-80, a 707, and maybe an L011?” she said.

“But she said specifically this was to New York,” Pierson braved on as Beinart began to laugh uncontrollably. “And this is what’s important. We can ex out the LC 11 and the DC 10. Guess what? The first-class seats have fixed armrests!”

It’s really come to this?

Peter Beinart could not contain his laughter during that last @CNNTonight segment https://t.co/JgD2aEcts0

And by the way – you knew this was coming – folks are already posting pictures of first class seats from the 70s and 80s which show some designs allowed passengers to lift and lower the armrest.

But, Katrina, girl, keep yourself together. Only a few weeks left to cash the check while embarrassing yourself.