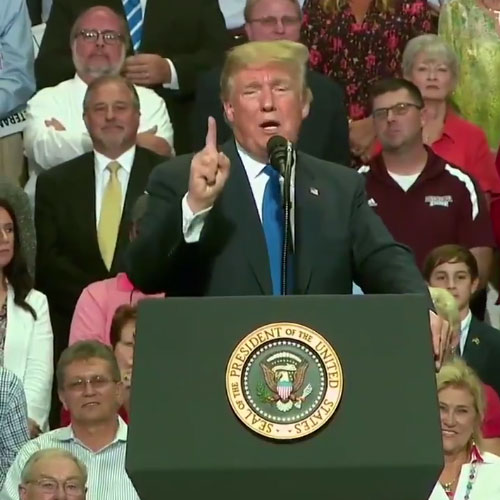 After telling the press that she had been “very compelling” last week after her testimony before the Senate Judiciary Committee, Trump questioned her credibility last night.

Imitating Ford and her questioner, Trump said, “‘I had one beer.’ Well do you think it was…?”

And the crowd went wild. Watch below.

Your father is an asshole.

This is the most misogynist display of barbaric insensitivity I’ve ever seen.

THIS IS WHY I DIDN’T REPORT. THIS RIGHT HERE.

Women are watching. And we vote. pic.twitter.com/VJgWPzNlRd

President Trump says Christine Blasey Ford’s testimony was “very compelling” and Brett Kavanaugh’s was “really something that I haven’t seen before. It was incredible.”

“But certainly, she was a very credible witness,” he adds, referring to Ford. https://t.co/OZ1W7ZOMeG pic.twitter.com/OnzXiD7try

As Trump mocked Dr. Ford during his rally, I couldn’t help but notice the little boy standing behind him.

The boy is watching the President of the United States mock sexual assault survivors & the crowd cheer in response.

There’s only one word to describe this man. He is a pig. His cruelty is infinite. https://t.co/sbGZT35FrW