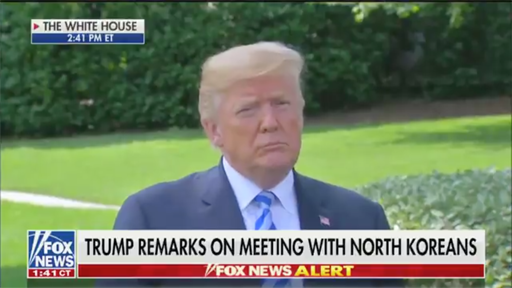 After canceling the much-ballyhooed summit with North Korea, Donald Trump now says the meeting with “supreme leader” Kim Jong-Un is back on.

The Trumpster made a point of lowering expectations for the outcome saying this will be more of a “get-to-know-you” kind of meeting (cough**photo-op**cough).

The summit was cancelled by the president last week on the grounds that Mr. Kim’s government had shown “open hostility” toward his administration.

The president rescheduled the get-together with Kim Jong-un, the North Korean leader, barely a week after scrubbing it on the grounds that Mr. Kim’s government had shown “open hostility” toward his administration. In the days since, both sides worked to bridge the divide and proceed with the meeting.

The reversal followed an Oval Office meeting on Friday afternoon with a high-ranking North Korean envoy who delivered a personal letter from Mr. Kim to Mr. Trump. The envoy, Kim Yong-chol, the former North Korean intelligence chief and top nuclear arms negotiator, became the first North Korean official to set foot in the White House since 2000 and only the second ever to meet with a sitting American president.

Trump characterizes his just-concluded meeting with top North Korea officials as “a get-to-know-you situation,” says the June 12 summit with Kim Jong-un is on. pic.twitter.com/nEts5q8gln

NEW: U.S.-North Korea summit is back on, Pres. Trump says; “June 12, we will be in Singapore. I’ve never said it happens in one meeting — you’re talking about years of hostility, years of problems, years of hatred between so many different nations.” https://t.co/he9uLA17dy pic.twitter.com/hSYtXLcBxQ

Trump on North Korea: “I don’t want to use the term maximum pressure any more.” (note – WH has been using that term for months)

Trump lowering expectations for what will happen at Singapore summit: "It will be a beginning. I've never said it will all happen in one meeting."— Jim Acosta (@Acosta) June 1, 2018

Trump lowering expectations: “we’re not going to go sign something on June 12. the process will begin”— John Harwood (@JohnJHarwood) June 1, 2018

Bottomline: #NorthKorea committed to nothing and promised nothing, including denuclearization, and yet got a first-ever summit with the US president, something Pyongyang has desired for decades.