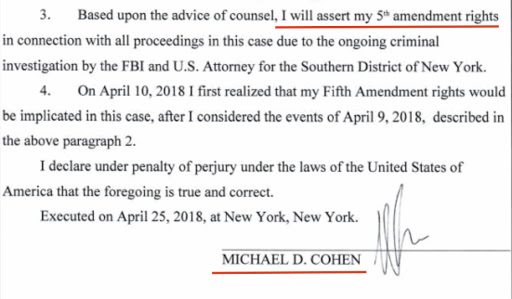 You’ll recall in September of 2016 during the presidential campaign, Donald Trump told a campaign crowd in Iowa, “The mob takes the Fifth. If you’re innocent, why are you taking the Fifth Amendment?”

Michael Cohen said he will assert his constitutional right against self-incrimination in the lawsuit by Stormy Daniels because of the ongoing criminal investigation against him.

Let’s look back at some highlights. pic.twitter.com/4kKT8wqB8Z

No big deal, just the personal attorney for the President of the United States asserting his 5th amendment rights regarding a $130,000 payment, made days before the election, to an adult film star who says she had an affair with Trump pic.twitter.com/9JkLgZosdJ