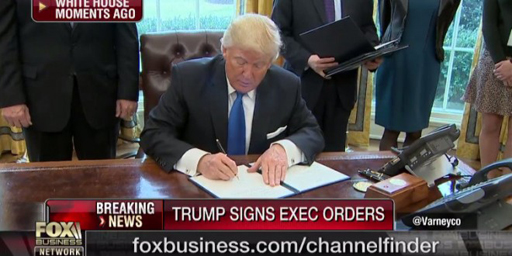 President Trump signed two executive actions Tuesday that will advance construction of the controversial Keystone XL and Dakota Access pipelines. The actions follow months of protests by environmentalists and Native American groups in North Dakota against the Dakota Access project, a $3.8-billion pipeline that would bring crude oil from the state’s Bakken oil patch through the Midwest and into the U.S. Gulf Coast.

Construction on the project was halted in December after the U.S. Army Corps of Engineers denied a permit for the pipeline to cross under a Missouri River reservoir in the area so it could explore alternate routes.

Now, with that in mind, from CBS News:

President-elect Donald Trump holds stock in the company building the disputed Dakota Access oil pipeline, and pipeline opponents warn that Trump’s investments could affect any decision he makes on the $3.8 billion project as president.

But remember: he “has no conflicts of interest…”