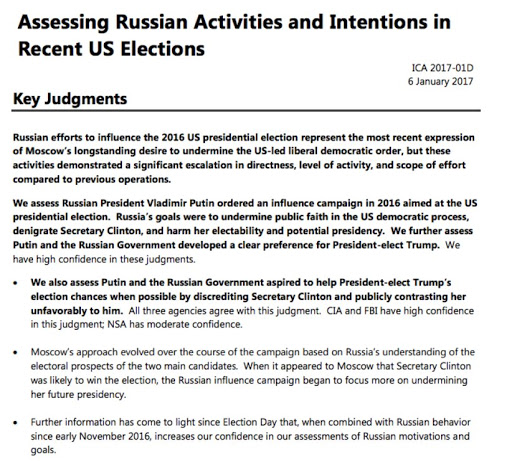 While it appears that Trump did listen, his main talking point after today’s intelligence briefing seems to be doubling down on the fact that he won the presidency on his own, with no help from Russia.

President-elect Donald Trump said he had a “constructive” meeting with intelligence officials on Friday, and while praising them still had questions about assertions that Russia hacked Democrats in an effort to influence last year’s election.

Claiming that Russia, China, and other countries and organizations are always launching cyber-attacks against the United States — “including the Democratic National Committee” — Trump said in a written statement that “there was absolutely no effect on the outcome of the election including the fact that there was no tampering whatsoever with voting machines.”

He added: “There were attempts to hack the Republican National Committee, but the RNC had strong hacking defenses and the hackers were unsuccessful.”

While criticizing aspects of the Russia investigation just hours before a special briefing, Trump said in his statement that
“I have tremendous respect for the work and service done by the men and women of this (intelligence) community to our great nation.”

Saying all Americans need to “aggressively combat and stop cyber-attacks,” Trump said that as president he would appoint a team to develop a new defense plan.

“The methods, tools and tactics we use to keep America safe should not be a public discussion that will benefit those who seek to do us harm,” the president-elect added. “Two weeks from today I will take the oath of office and America’s safety and security will be my number one priority.”

Before his high-profile briefing at Trump Tower, the president-elect also announced he has asked Congress to investigate what he believes to be the leak of a secret intelligence report on the Russians to the news media. He tweeted: “I am asking the chairs of the House and Senate committees to investigate top secret intelligence shared with NBC prior to me seeing it.”

Trump has also protested news coverage on Thursday night, tweeting: “How did NBC get ‘an exclusive look into the top secret report he (Obama) was presented?’ Who gave them this report and why? Politics!”

The president-elect had a nearly two-hour briefing that included Director of National Intelligence James Clapper, CIA Director John Brennan and FBI Director James Comey, all of whom have cited evidence pointing to a Russian plan to hack Democrats backing Clinton, perhaps in an effort to aid Trump.

A declassified version of the report was released today via the Director of National Intelligence: