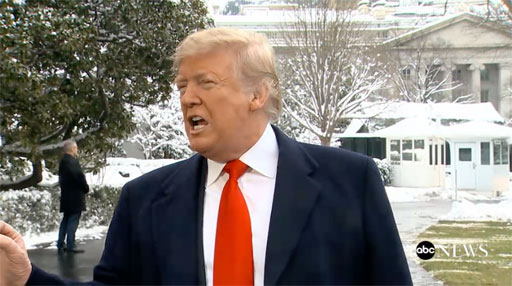 Donald Trump finally gave reporters a clear ‘no’ today when asked about the allegations that he’s been trying to conceal his communications with Russian President Vladimir Putin.

“I never worked for Russia,” Trump told reporters. “It’s a disgrace that you even asked that question because it’s a whole big fat hoax. It’s just a hoax.”

“I never worked for Russia,” President Trump says in response to a NYT report that the FBI opened a probe.

“Not only did I never work for Russia, I think it’s a disgrace that you even asked that question because it’s a whole big, fat hoax,” he adds https://t.co/IkdXiga7TC pic.twitter.com/SWhviYxlKZ

Trump also said he doesn’t know anything about what happened to the notes taken by an interpreter when he met with Putin last summer in Finland.

White House adviser Kellyanne Conway told reporters today that she believes Donald Trump seized his translator’s notes after a 2017 meeting with Russian President Vladimir Putin because the West Wing had been “suffering from a great number of leaks” at the time.

She also admits, however, that she hasn’t discussed the issue with Trump.

@WhiteHouse doesnt seem to be denying that @realdonaldtrump confiscated interpreters notes from Putin conversation. @KellyannePolls says she hasnt talked with POTUS directly about it, but suggests part of the reason may have been #leaks of information around the time of the G-20.