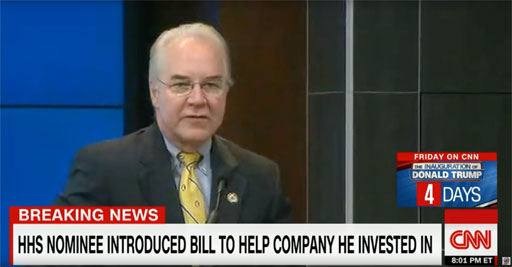 According to Salon, Price introduced legislation last year that helped a biotech company he had just bought shares of stock in.

Less than a week after buying between $1,001 and $15,000 of shares in Zimmer Biomet, Price introduced a bill known as the HIP Act. Its objective was to delay until 2018 a Centers for Medicare and Medicaid Services regulation that would have impacted payments for the knee and hip implants in which the corporation specializes, CNN reported on Monday. Zimmer Biomet’s political action committee subsequently made a donation to Price’s reelection campaign.

This isn’t the first time that Price has been criticized for pushing legislation that could financially benefit medical companies in which he had invested stock. Last month, it was reported that over the last four years Price had traded roughly $300,000 in shares in health companies that would directly benefit from legislation he was pursuing.

In 2012, Congress passed The Stock Act which was designed to prevent lawmakers from profiting from stock trading based on any knowledge they could have from the legislative process.