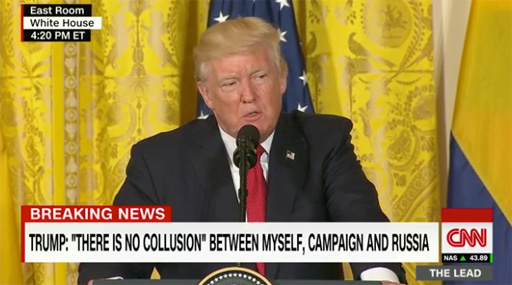 Standing next to Colombian President Juan Manuel Santos Calderón at a joint press conference today, President Donald Trump categorically denied there was any collusion between him and Russia during the 2016 election cycle.

Collusion between his campaign staff and Russia? He was a little more nuanced on that.

Toobin: Trump categorically denied collusion on his part but was a lot more cautious when talking about his campaign https://t.co/ipzI59vJJ9

Additionally, when asked point-blank if he had ever requested former FBI Director Jim Comey to “close or back down” on the FBI investigation into former National Security Adviser Mike Flynn, Trump abruptly declared, “No. No. Next question.”

Reporter: Did you ask Comey to back off of investigation of Michael Flynn?