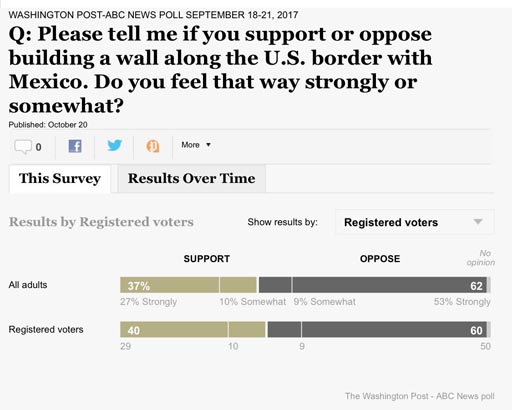 After a bipartisan panel of five U.S. Senators have spent months hashing out an immigration deal that would tighter national security while also giving DACA recipients protection from deportation, Donald Trump has upended the game board issuing a list of demands including $18 billion to begin building a wall on the U.S./Mexican border before he will grant young immigrants protection.

The request, which totals $33 billion over a period of 10 years for border security measures including the wall, could jeopardize bipartisan talks aimed at getting an immigration deal. Among the items on Mr. Trump’s immigration wish-list: money to hire 10,000 additional immigration officers, tougher laws for those seeking asylum, and denial of federal grants to so-called “sanctuary cities.”

The list, delivered to Senator Richard J. Durbin, the Illinois Democrat who has been leading the talks related to young immigrants without documentation, is identical to one Democrats declared a non-starter when the White House issued it in October.

“President Trump has said he may need a good government shutdown to get his wall,” a furious Mr. Durbin said in an emailed statement Friday afternoon. “With this demand, he seems to be heading in that direction.’’

A poll in September (above) shows 62% of all Americans oppose building a wall along the U.S./Mexico border. Only 27% “strongly support” the idea of a wall.

This is why Trump cancelled #DACA – so he could issue an $18 billion ransom note for #Dreamers. It’s despicable. https://t.co/s629Sskvaj

Trump holds the DACA kids lives hostage. He says no wall, no DACA.https://t.co/iOZnXqfKRQ