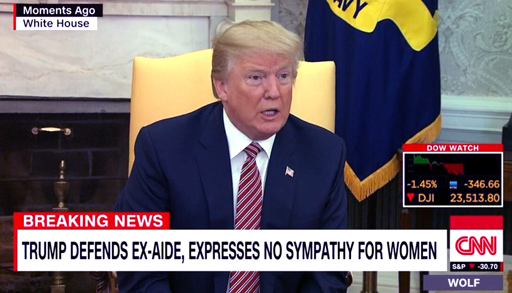 What is it with Donald Trump that he has to defend White House advisers as they exit due to their own bad behavior?

Trump made a point of telling reporters that he only recently became aware of Porter’s history of abuse, says he “was very surprised by it,” adding, “It’s obviously a tough time for him.”

“We wish him well. He worked very hard. I found out about it recently and I was surprised by it. But we certainly wish him well. It’s obviously a tough time for him. He did a very good job when he was in the White House. And we hope he has a wonderful career. Hopefully, he will have a great career ahead of him. But, it was very sad when we heard about it. And certainly, he’s also very sad.

“Now he also, as you probably know, he says he’s innocent and I think you have to remember that. He said very strongly yesterday that he’s innocent. So, you’ll have to talk to him about that. But we absolutely wish him well. Did a very good job while he was at the White House.”

Gee, I’ll bet it was a tough time for the ex-wives. But Trump’s got nothing for them.

Trump also said Porter “says he’s innocent and I think you have to remember that […] but we absolutely wish him well.”

The Donald didn’t address the fact that Porter is currently dating White House communications director Hope Hicks, who is one of his closest advisers.

He's blaming Hope Hicks … "The president feels that Hope Hicks has allowed her romantic relationship with Porter to really cloud her judgment and her decision-making … that Hope Hicks put her own priorities above his and above the White House's." pic.twitter.com/ahPjkyxszI— Josh Marshall (@joshtpm) February 9, 2018

If @rihanna is dating @chrisbrown again then she has a death wish. A beater is always a beater–just watch!— Donald J. Trump (@realDonaldTrump) October 11, 2012