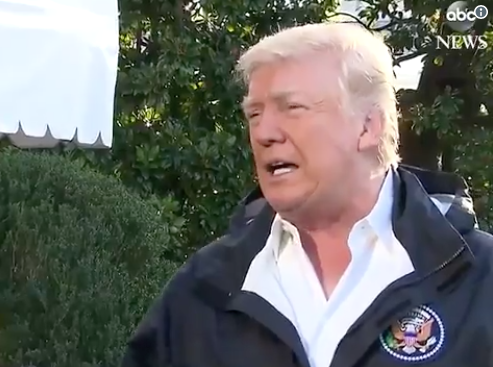 Donald Trump continued praising the federal government’s efforts in Puerto Rico today as he shifted blame to local truck drivers for any delay in improving conditions on the hurricane-battered island.

President Donald Trump says the federal government has done a good job in Puerto Rico responding to the devastation caused by Hurricane Maria, but says local officials need to “give us more help.”

Trump says Tuesday that “in Texas and in Florida we get an A-plus, and I’ll tell you what, I think we’ve done just as good in Puerto Rico.”

Trump says roads are cleared and communications are “starting to come back.” He says on a “local level they have to give us more help.”

The president lashed out at the mayor of San Juan after she criticized the federal response. He now says that San Juan Mayor Carmen Yulin Cruz “has come back a long way.”

The White House says Cruz had been invited to participate in Tuesday’s events, but it was unclear whether she and the president would meet.

Pres. Trump lauds federal recovery efforts in Puerto Rico, adding, “On a local level they have to give us more help” https://t.co/574hJ6txjU pic.twitter.com/ivfoi1745f

I spoke to a guy who just returned from an aid run to PR on Sunday. There’s no diesel to move their trucks. https://t.co/zVnU31kyQ2