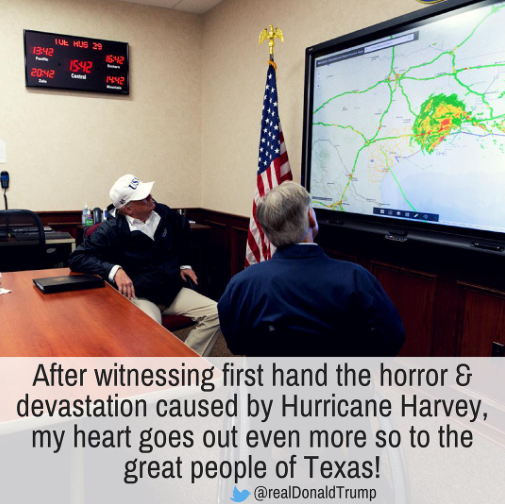 The above image, captioned “After witnessing first hand the horror & devastation caused by Hurricane Harvey, my heart goes out even more so to the great people of Texas,” was posted to Donald Trump’s Instagram account last night.

Of course, the fact is Trump did not witness “first hand” any devastation or horror caused by Hurricane Harvey because he didn’t visit any of the devastated areas during his hours long-visit to Texas yesterday.

Nor did he meet or console any of the victims of the flooding caused by the storm.

His press secretary was asked what he meant by “first hand,” and this was the response:

“He met with a number of state and local officials who are eating, sleeping, breathing the Harvey disaster. He talked extensively with the governor, who certainly is right in the midst of every bit of this, as well as the mayors from several of the local towns that were hit hardest. And detailed briefing information throughout the day yesterday talking to a lot of the people on the ground — that certainly is a firsthand account.”

Actually, being told information you haven’t experienced yourself is the very definition of a “second-hand account.”

And the Twitterverse jumped right in:

This is the best photo they could find for “witnessing first hand” pic.twitter.com/WoiCA7Piz4

let’s not forget the day that Trump had a first-hand experience of walking on the moon pic.twitter.com/6FqbkMdCac

Whoa, Trump has first-hand experience of serving as a Prince. pic.twitter.com/CHnQ9MJEHi

Or the day Trump first-hand won the Super Bowl… pic.twitter.com/RmVeUBUKVc

That is the literal definition of a secondhand account.

Our reporting does not match claim that @POTUS witnessed any horror or devastation first hand. #harvey https://t.co/KP4ejyLVpF @dallasnews https://t.co/HBObIh9Tgt