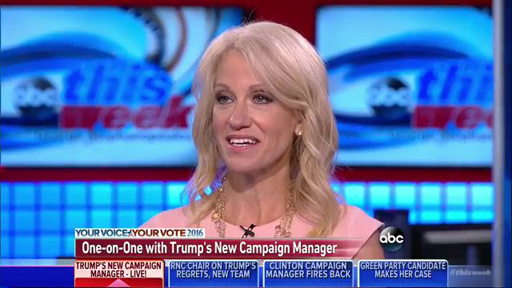 The outreach was based on the notion that black voters “can’t do any worse” than they have with Democrats – an odd way to ask for votes.

It was also interesting that he made the statement in a Michigan town that is 94% white. There were practically no faces of color in the audience.

This morning on ABC News’ This Week, George Stephanopoulos told new Trump campaign manager Kellyanne Conway that a great number of voters were offended by Trump’s wide generalization of poverty in the African-American community. In a strange response,  Conway explained that she lives in a white community and she was “moved” by his comments.

STEPHANOPOULOS: As you know — you were just talking about that. But many in the African American community saw that as insulting because they say most African Americans don’t live in poverty and that Mr. Trump was making those comments in communities that are more than 90 percent white.

CONWAY: Those comments are for all Americans. And I live in a white community. I’m white. I was very moved by his comment. In other words, he is trying to tell Americans that we can do better. And the thing that he said that I think got a great deal of resonance is that maybe Hillary Clinton looks at you as voters as your — takes you for granted. I look at you as people.