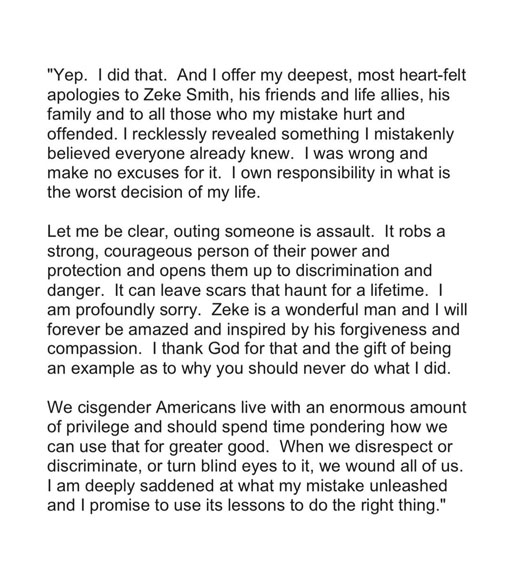 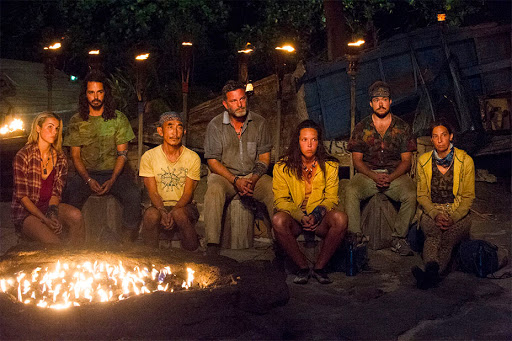 I’ve been watching the CBS reality competition Survivor since the very first season. One of the very few shows we’ve been loyal viewers of for years, hubby Michael and I will wait to watch episodes together if we happen to be apart on Survivor nights.

The social discourse is often fascinating to me. The degree that contestants will go, whether physical or social, to win a million dollars reveals much about who they are – good and bad.

But at last night’s tribal council, 3-time player Jeff Varner, who is gay himself, chose to out fellow competitor Zeke Smith as transgender. Truly the lowest move any competitor has made in the show’s 34 seasons.

While this reveals the worst in Varner, the reaction from Smith’s fellow competitors is deeply moving.

I should say up front that GLAAD’s Transgender Media Program worked with Zeke Smith and CBS for several months to ensure that when the episode aired Zeke would have the opportunity to speak for himself about his experience.

From the Daily Beast:

Zeke Smith didn’t want to be known as the “first transgender Survivor star.” Now, another contestant has taken that choice away. During Wednesday night’s episode of Survivor: Game Changer, which finds contestants from previous seasons returning to the “reality” competition show, Jeff Varner unexpectedly outed the 29-year-old Smith as a transgender man.

“Why haven’t you told anyone here you’re transgender?” Varner pointedly asked Zeke, in front of their team at the tribal council, where they were about to vote to eliminate one of their number from the show.

Varner was immediately condemned by the other members of the “tribe” who shouted things like, “That’s personal!” and, “You didn’t have to do that!” and, “Nobody has the right to out anybody.” Tai Trang, a 51-year-old gay gardener, was particularly outraged and leapt to Smith’s defense.

Watch the full tribal council below:

I’ll start with this: no one who “argues for the rights of transgender people every day,” as Varner argues in his defense, would ever utter the sentence, “Why haven’t you told anyone here you’re transgender?”

There’s something profoundly broken in Jeff Varner that, in his desperation to win $1 million, he could out someone as transgender. His tactic here was to connect being transgender with “deception.” Think on that for a minute.

“There is deception here. Deceptions on levels, Jeff, that these guys don’t even understand. Why haven’t you told anyone that you’re transgender?” said Varner.

His disconnect becomes even more apparent when, in realizing that his strategy backfired, he immediately looks for absolution. “I don’t want the perception to be that I’m this evil hateful person,” he said.

I won’t pile on Varner – he can sort this out for himself – but I will say I hope he can heal this thing inside him that is so damaged.

One of the most moving moments – and one which explains why it was important that CBS share this – is when contestant Sarah Lacina finally spoke:

“I’m just thankful that I got to know Zeke for who Zeke is. I’ve been with him for the last 18 days, and he’s like super-kickass. And you know I’m from the Midwest, I come from a very conservative background, and so it’s not very diverse when it comes to a lot of gay and lesbian and transgender and things like that. So I’m not exposed to it as much as most of these people are, and the fact that I can love this guy so much, and it doesn’t change anything for me makes me realize that I’ve grown, huge, as a person.”

“I’m sorry that it came out that way. But I’m glad that it did. And like I’m so glad that I got to know you for Zeke and not, you know, what you were afraid of us knowing you as. And I’ll never look at you that way.”

Smith’s reaction was strikingly human. And his ability, in the moment, to bring the conversation around to the idea of “metamorphosis” was profound.

Smith  has had months since the event to gather his thoughts, and he’s done so to exceptional degree in a personal essay shared by The Hollywood Reporter.

I encourage you all to read the entire piece as it not only provides a window into Survivor as a game, but Smith’s journey as a transgender man.

[But] in calling me deceptive, Varner invoked one of the most odious stereotypes of transgender people, a stereotype that is often used as an excuse for violence and even murder. In proclaiming “Zeke is not the guy you think he is” and that “there is deception on levels y’all don’t understand,” Varner is saying that I’m not really a man and that simply living as my authentic self is a nefarious trick. In reality, by being Zeke the dude, I am being my most honest self — as is every other transgender person going about their daily lives.

I don’t believe Varner hates trans people, just as I don’t believe conservative politicians who attack trans people actually care where we use the bathroom. For both, trans people make easy targets for those looking to invoke prejudice in order to win votes. Thankfully, my tribemates rebuffed his hateful tactics. After 18 days starving and competing with me, they knew exactly the man I am, and after that Tribal Council, we all knew exactly the man Varner is.

I looked to Varner, now the one hunched and quivering, and contemplated the backlash he would face. When he said what he said, he changed both of our lives forever. When he pulled me in for a hug, I felt compelled to reciprocate, both as a sign that I was willing to forgive him and that the shots he had fired missed.

But, if we’re being perfectly honest with one another, I’ve struggled with that forgiveness in the months following. I can’t foresee us sipping martinis together in Fire Island. While I can reconcile the personal slight of him outing me, I continue to be troubled by his willingness to deploy such a dangerous stereotype on a global platform.

Nick Adams, Director of GLAAD’s Transgender Media Program, issued this statement: “Zeke Smith, and transgender people like him, are not deceiving anyone by being their authentic selves, and it is dangerous and unacceptable to out a transgender person. It is heartening, however, to see the strong support for Zeke from the other people in his tribe. Moments like this prove that when people from all walks of life get to know a transgender person, they accept us for who we are.”

Varner wrote in a statement he posted on Twitter, “Yep. I did that. And I offer my deepest, most heart-felt apologies to Zeke Smith, his friends and life allies, his family and to all those who my mistake hurt and offended.”