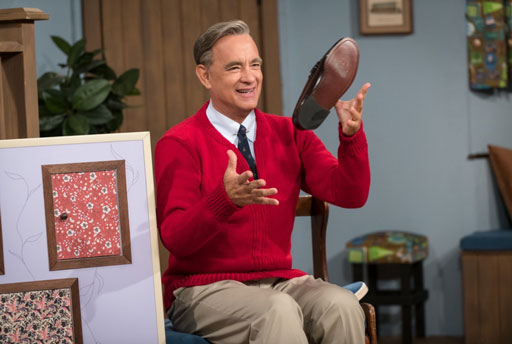 From a time when decency and empathy were still admired, check out the new trailer for the upcoming Fred Rogers biopic, A Beautiful Day in the Neighborhood.

Inspired by an article penned by Tom Junod for Esquire (“Can You Say…Hero?”), two-time Oscar winner Tom Hanks portrays Fred Rogers (Mister Rogers’ Neighborhood) in a timely story of kindness triumphing over cynicism, based on the true story of a real-life friendship between Rogers and Junod.

The official longline reads: “After a jaded magazine writer (Emmy winner Matthew Rhys) is assigned a profile of Fred Rogers, he overcomes his skepticism, learning about empathy, kindness, and decency from America’s most beloved neighbor.”

Earlier this year, it came to light that Rogers referred to himself as sexually fluid.

According to Maxwell King’s 2018 biography of Rogers, The Good Neighbor: The Life and Work of Fred Rogers, the TV host and puppeteer is quoted from a conversation with one of his friends, Dr. William Hirsch, regarding his own sexuality as saying, “Well, you know, I must be smack in the middle. Because I have found women attractive, and I have found men attractive.”