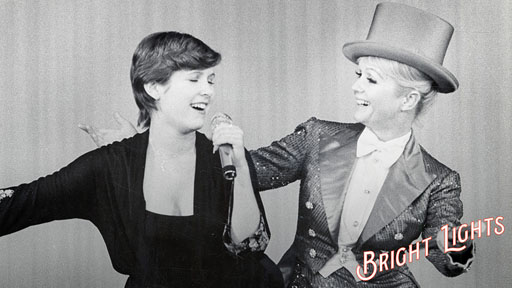 I’ll just say this: you might need a tissue.

Bright Lights: Starring Carrie Fisher and Debbie Reynolds bills itself as a story of the family’s complicated love, and promises an intimate portrait of Hollywood royalty in all its eccentricity and the nearly two-minute trailer shows off exactly that, along with many sweet moments (and witty banter) shared between Fisher and Reynolds.

Directed by Alexis Bloom and Fisher Stevens, the 95-minute documentary was filmed in over more than a year in 2014 and 2015 leading up to Reynolds preparing to receive her Screen Actors Guild Life Achievement Award which Fisher presented to her.

Vintage family films and archival footage help bring the documentary to life. Their lives at home in the Beverly Hills compound they shared will be seen extensively in the documentary as will be the way in which they navigated their careers and close relationship.

Fisher, 60, was aboard an 11-hour flight from London to Los Angeles on Friday when she went into cardiac arrest. She died Tuesday in the hospital.

Reynolds died a day later at the age of 84. Her son Todd said she told him hours before she was rushed to the hospital: I miss her so much, I want to be with Carrie.