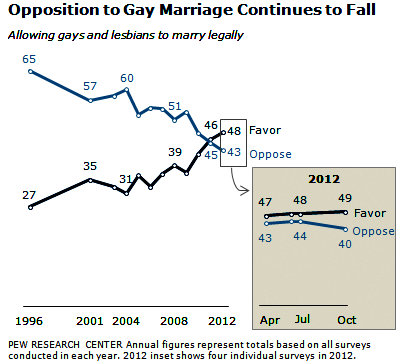 A new poll from the Pew Research Center takes a closer look at the changed tides of marriage equality in America with two to one support in the Northeast but opposition still in the South.

In New England, 62% favor same-sex marriage, while 29% oppose it. In the mid-Atlantic, 57% favor and 34% oppose allowing gay marriage. Opinions among those on the Pacific Coast are similar (54% favor, 37% oppose). In the Midwest, which includes Minnesota, opinion is more evenly divided (46% favor, 44% oppose).  Voters in Minnesota did not approve gay marriage, but did vote to keep the ban from becoming part of the state’s constitution.

People in the South express greater opposition. A majority (56%) in the central Southern states such as Alabama, Kentucky, Louisiana, Oklahoma and Texas oppose same-sex marriage, while about a third (35%) favors it. The divide is more narrow in the South Atlantic states such as Florida, Georgia, Virginia and the Carolinas (48% oppose, 42% favor).