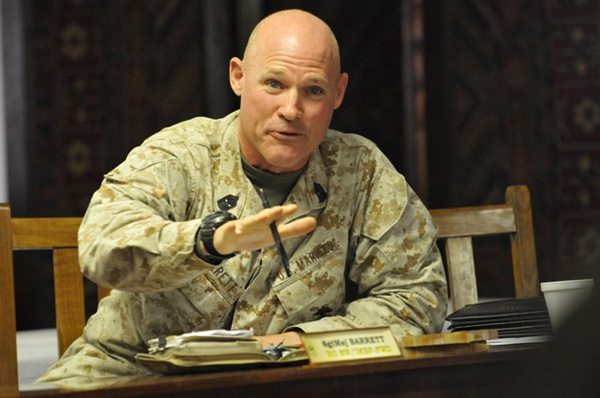 The Command Sergeant Major of the Marine Corps, Sgt. Maj. Micheal Barrett, the top non-commissioned officer, addressing Marines regarding the repeal of DADT:

“Article 1, Section 8 of the Constitution is pretty simple,” he told a group of Marines at a base in South Korea. “It says, ‘Raise an army.’ It says absolutely nothing about race, color, creed, sexual orientation.

“You all joined for a reason: to serve,” he continued. “To protect our nation, right?”

“How dare we, then, exclude a group of people who want to do the same thing you do right now, something that is honorable and noble?” Sgt. Maj. Barrett continued, raising his voice just a notch. “Right?”

Sgt. Maj. Barrett then described conversations with U.K. troops, who saw a similar ban lifted a decade ago, with little disruption. And to drive the point home, he produced a pocket copy of the Constitution.

“Get over it,” he said. “We’re magnificent, we’re going to continue to be. … Let’s just move on, treat everybody with firmness, fairness, dignity, compassion and respect. Let’s be Marines.”

There. That was pretty simple now, wasn’t it?