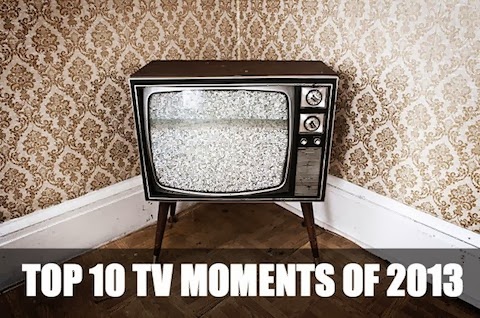 Fox News (this is non-political, folks, so I can cope with them on this) has assembled what they call “The most-talked about television moments of 2013.”

I have a short attention span, so here’s the top five. Do you agree?

3. Miley Cyrus Twerks it Out at the VMAs

And the top TV momement of the year is….

A hurricane hit Los Angeles, pulling killer sharks out of the ocean to terrorize Tara Reid and Ian Ziering–and becomes one of the biggest Twitter trends of 2013.

The SyFy disaster movie inspired dozens of celebs–including Elizabeth Banks, Wil Wheaton and Horatio Sanz–to tweet their excitement and fascination. Olivia Wilde spoke for many when she tweeted this message to her followers, ”I just recorded it based on this review: ‘@MiaFarrow: Omg omg OMG #sharknado’.”

So congratulations “Sharknado” – you are the TV event of 2013! Can’t wait for the sequel.