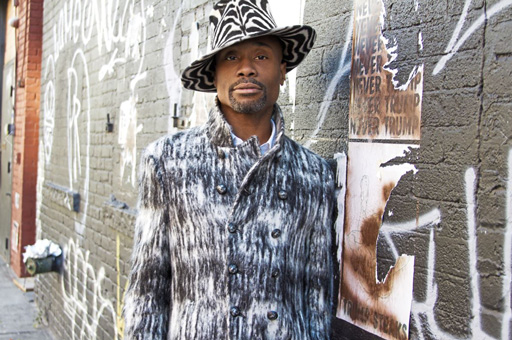 Tony and Grammy Award winner Billy Porter has penned a powerful op-ed for his hometown newspaper, the Pittsburgh Post-Gazette, titled “Why I Am Committed To Disturbing The Peace.”

God, I love me some Billy Porter. The phrase “force of nature” seems like an understatement when describing his incredible spirit.

James Baldwin said, “An artist’s job is to disturb the peace.” I take my job very seriously. The challenging thing about crossover success is that it sometimes comes in the form of playing characters that everyone can love for his or her diplomacy. Everyone loves Switzerland. Here’s what I need everyone to understand as we all move forward. I won a Tony Award as the big-hearted drag queen Miss Lola in “Kinky Boots” — a character I loved playing and will soon play again on Broadway. I suspect many of you came to the concert expecting Lola. And while there are many similarities between us, Lola is a creation of fiction and resides in the comfortable space we in show business call “commercial success.”

Billy Porter the man is a very different entity with a voice that will never be defined or confined by anything or anybody. And while I profoundly apologize for cussing in front of children, I encourage you all to harness and activate the same outrage you have for my F-Bombs and direct that energy to our “leader,” who managed to get elected even after bragging about grabbing women by their … well, this is a family newspaper. I find myself staring in the face of a president and an administration that think it’s perfectly fine to put my humanity up for legislation — again! We already did this, y’all. Folk have already fought and died for our rights, so excuse me if I’m having a hard time worrying about other people’s comfort levels.

I’m turning on my news outlets every day and seeing the leader of the free world lie every time he opens his mouth. I see a man whose lies have led to an investigation of collusion and treason against our country. I see the GOP standing silent to all these things and therefore complicit in them. I also see Congress, under the cloak of many-a-night, aggressively passing laws that roll back progress and protections we’ve made in the country over the past century pertaining to my basic human rights by making discrimination against me legal … again! I see an administration attacking my transgender brothers and sisters in the military just because it can. I see it attacking women. I see the KKK and white supremacist attacking my Jewish brothers and sisters in this country by marching mask-less in the streets and chanting, “Jews will not replace us,” among many other terrifying things, and a president who responds by blaming the victims. And this is just the tip of the iceberg of the last 200-plus days of terror this administration has vomited on this country. I haven’t slept in months. I fear for my safety and my family’s every time I step out of the bubble that is New York City.

I know in my heart that ultimately love is the answer, but sometime tough love needs to be implemented, and it ain’t pretty. I’m working on grace. But the line has been drawn in the sand. It’s unfortunate, but there are sides now. I’ve chosen mine. You chose yours.

I really encourage you to click over and read the full op-ed.

I’ve known Billy for almost 30 years. As I and the public at large is very aware, he is a man of incalculable talent and passion. Billy knows and speaks his truth with ferocious heart.

I interviewed Billy a few months ago as he released his newest album, The Soul of Richard Rodgers. You can listen to Billy speak truth to power in that interview here.