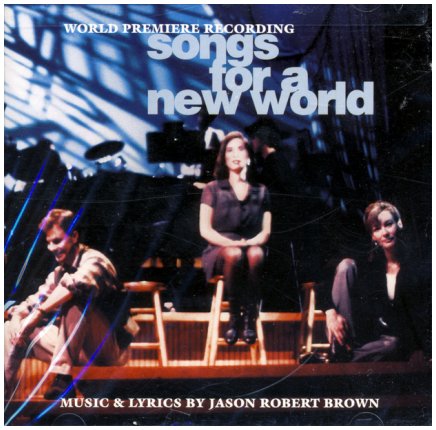 In a post on his personal blog, Tony Award winner Jason Robert Brown shares the original demo of the opening of his Songs for a New World, which premiered in NYC 20 years ago.

Hard to believe the piece is already 20. I remember when it first arrived and theater audiences first discovered Brown’s terrific writing. Since then, the show – essentially a revue – has become a favorite for colleges and regional theaters.

I loved the entire cast recording, although due to contractual issues at the time Tony Award winner Billy Porter was not allowed to record the cast recording. Fab Ty Taylor filled in for the recording, but I’ve always longed to hear Billy sing this glorious opening number.

October 12, 1995, was the first performance of Songs for a New World at the WPA Theatre on W. 23rd St. in Manhattan. Almost no one saw it, the reviews were polite but dismissive, and the theater doesn’t even exist anymore. Yet Songs for a New World lives on, in its wonderful cast album (produced by the great Jeffrey Lesser and released by the visionary Bill Rosenfield) and in the hundreds of productions the show receives all around the world every year.

You can go here to see photos of the original production and read the reviews. And below, I’ve posted (for the first time) the original demo recording of the opening sequence of the show – all twelve minutes of it! – featuring four amazing singers who did so much to shape the sound of the show. Andréa Burns and I had known each other since summer camp in the 80s, and Billy Porter sang during my shifts in the piano bar at Don’t Tell Mama when he would finish his performances in Miss Saigon; they both were able to stay with the project for its entire development. I’ve talked about Amy Ryder a lot on this blog and how much she supported me in my first years in this business and made NY feel like home. And finally, Brian d’Arcy James came in for an audition for a project at Manhattan Theatre Club that I was music-directing, and I immediately grabbed him and got his phone number because I knew I needed him to sing my music.

The voice you can’t hear on the demo is that of my director and collaborator and confidante and support system, Daisy Prince, who heard my songs in a piano bar and signed on to the next four years of her life building this crazy revue.

Twenty years is a long time, and it feels like it, actually. I saw Andréa, Brooks, Billy and Jessica just four days ago at a reading of Prince of Broadway and we are all profoundly different than we were back then, and yet we are still connected, bound by this marvelous mad adventure we had. Songs for a New World was my first professional show. And it was glorious.