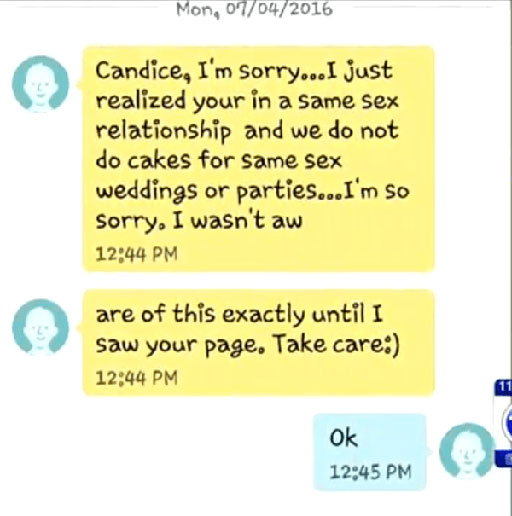 A bakery in Toledo, Ohio, has refused to sell a birthday cake after viewing the customer’s Facebook page and realizing she is lesbian and in a same-sex marriage.

To clarify, the customer – Candice Lowe – was not looking for a wedding cake. This was a birthday cake meant as a surprise for her wife, Amanda, of two weeks.

The couple, who are sill celebrating their recent nuptials, were stunned to get word via text message that the bakery would not sell them a birthday cake because they “do not do cakes” for same-sex parties.

“I just realized you are in a same-sex relationship and we do not do cakes for same-sex weddings or parties…I’m so sorry, I wasn’t aware of this exactly until I saw your [Facebook] page. Take care :)”

The bakery’s Facebook page has been inundated with comments supporting the Lowes.

LGBT activist Dan Savage weighed in on his blog:

According to the local ABC affiliate, the bakery had indicated they were open to comment on the story, but as you can see in the report below, the owners stopped answering or returning calls to reporters.