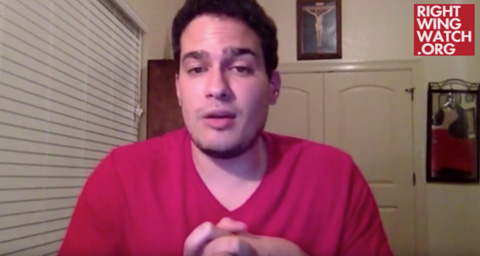 Virulently anti-gay Theodore Shoebat is oh so unhappy that President Obama has nominated openly gay Eric Fanning to be Secretary of the Army.

“In 2012, Obama got rid of Don’t Ask, Don’t Tell,” Shoebat declared, “which basically means that fags can be out in the open in their flaming fag ways, regardless of the fact that they are decreasing the morale of fellow soldiers. It doesn’t matter, they can be flaming homos right there in the U.S. military, they can be sodomizing each other right there in the military barracks.”

The nomination of “Eric Flaming Fag,” as Shoebat put it, by the “pro-fag, pro-sodomy, anti-family, anti-Christ president” is just further “evidence as to the bullcrap that we have been seeing throughout the years from this satanic administration.”

I gotta say, my gaydar is pinging here. We’ve got some wildly flamboyant hand gestures and air quotes going on.

This Shoebat is seriously batshit crazy.

Hey man – the 80s called, they’d like their homophobia back.