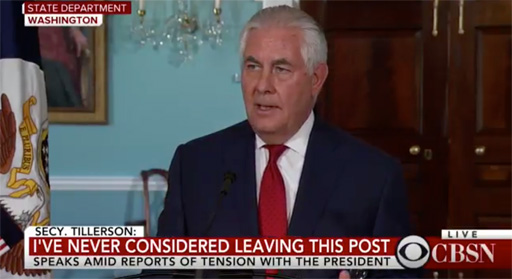 Trouble in Trump Land today as Donald Trump lambasted NBC News for reporting that Secretary of State Rex Tillerson threatened to resign this past summer when Donald Trump gave a highly politicized speech at the Boy Scouts of America Jamboree.

Secretary of State Rex Tillerson was on the verge of resigning this past summer amid mounting policy disputes and clashes with the White House, according to senior administration officials who were aware of the situation at the time.

The tensions came to a head around the time President Donald Trump delivered a politicized speech in late July to the Boy Scouts of America, an organization Tillerson once led, the officials said.

Just days earlier, Tillerson had openly disparaged the president, referring to him as a “moron,” after a July 20 meeting at the Pentagon with members of Trump’s national security team and Cabinet officials, according to three officials familiar with the incident.

In an unscheduled statement to reporters Wednesday morning, Tillerson directly addressed that version of events, saying, “I have never considered leaving this post.”

If you ask me, the secretary appears to be playing to an audience of one. And you know exactly who I mean.

After Tillerson’s comments, MSNBC’s Stephanie Ruhle (who contributed to the report) told viewers that her source said not only did Tillerson call Trump a “moron,” he called Trump a “f*cking moron.”

You can watch Tillerson respond to reporters this morning where he clearly dodges the question of whether or not he actually called the president a “moron.”

Wow, so many Fake News stories today. No matter what I do or say, they will not write or speak truth. The Fake News Media is out of control!

NBC news is #FakeNews and more dishonest than even CNN. They are a disgrace to good reporting. No wonder their news ratings are way down!

The @NBCNews story has just been totally refuted by Sec. Tillerson and @VP Pence. It is #FakeNews. They should issue an apology to AMERICA!

I am told Trump yelled at Tillerson this morning for over 10 minutes on the phone. Now Tillerson is having surprise press?

Reporter asks Tillerson: “Can you address the main headline of the story? That you called the president a moron…” pic.twitter.com/Wk2yjHGOYz

Secretary of State Rex Tillerson just now pointedly did not deny NBC News report that he called the president a moron in front of others.