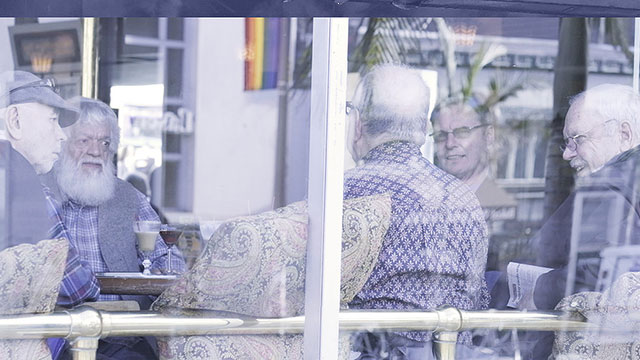 I highly recommend the terrific documentary, Through The Windows, currently streaming on the LGBTQ+ streaming platform Revry.

The film tells the story of San Francisco’s Twin Peaks Tavern, the bar that changed the face of the gay community in the 70’s by opening its windows, and the men who dared to be seen.

By weaving together the stories of this historic bar, the first known gay bar in the United States to open its windows to the outside, and the stories of some of the bartenders and patrons who have been going there for almost 40 years, we create an impactful film with stories that are disappearing with the generation that experienced them.

Through the interviews, we get glimpses into the gay community from a time that is almost forgotten — when there was no language to describe what it meant to be gay, when gay bars were only down back alleys, and when being gay was still not only taboo, but illegal.

I happened across Through The Windows while TV surfing recently and found the story of Twin Peaks Tavern and its longtime patrons heartwarming while it fanned a bit of Pride in my soul.

Rather than a hard core history lesson “lecturing” about how difficult gay life was in the early 70s, the filmmakers of Through The Windows take an artful but comfortable approach in relating the history of a place that sounds like a queer “Cheers,” where everybody knew your name.

Sharing what it meant to be the first bar in the U.S. to have open windows and for the patrons to step out of the shadows was truly a major “coming out” event in the history of the LGBTQ+ movement.

Initially released in 2019, you can view the film at Revry through the end of the month.

You can find more of my coverage of LGBTQ-themed documentaries at this link.

Watch the trailer for Through The Windows here.