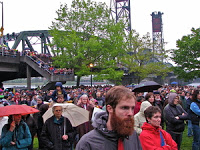 On Sunday night, more than 4,000 people showed up to a Facebook-organized demonstration against last week’s anti-gay hate crime in Portland, Oregon and held hands across the Hawthorne bridge where the attack occurred.

JustOut blog reports that, “demonstrators packed into the space beneath the west side of the bridge at about 7:30 p.m., spilling over onto the ramp and stairs to hear from the attack’s survivors, Brad Forkner and Christopher Rosevear. Afterward, the crowd filed down both sides of the bridge with hands held. Despite being tightly packed together, some attendees could not fit on the bridge.

Before the crowd moved to the bridge, Forkner talked about the attack, explaining that the violence he experienced is part of a larger culture of discrimination and fear:

“This is not the first time I have feared for my safety or my life and, sadly, I don’t expect it to be the last,” Forkner said. “What I want to talk about is a much larger cultural issue we have with making different people feel like they’re worth less than normal people, as if there is such a thing as “normal.” In this instance, it was because we are gay.”

After Forkner’s speech, Basic Rights Oregon Executive Director Jeana Frazzini thanked Forkner and Rosevear for their courage and invited the crowd to take part in a display of love and affection:

“Holding hands is an act of love. It’s an expression of affection and it’s a symbol of faith in another human being. And tonight in this crowd we’re surrounding Brad and Christopher — and everyone who’s been the victims of violence and oppression and hateful words because of who they love or who they are — with the love that is Portland, with love that is Oregon and with the love that we can spread across this city, this state, this nation and the world.”